Labour leader Jeremy Corbyn singles out work of CLES and Preston Council for praise in a major speech on public ownership and the economy. 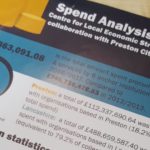