A new era for the UK economy?

On 17th July CLES convened the UK’s first Local Wealth Building Summit. Hosted by the University of Birmingham and funded by Barrow Cadbury Trust, the event celebrated ten years of work to build wealth in communities across the UK and posed the key question – how do we grow these ideas so they are no longer simply a powerful alternative but a new economic mainstream?

From Kirklees to Dagenham, Birmingham to Preston, and even across the pond in Ohio, delegates and speakers spoke passionately about the work being done in communities to counter the extraction of wealth from people and places, build greater equality and create inclusive economies.

A lively opening panel was testament to breadth and depth of the local wealth building movement.  No longer a marginal pursuit for struggling places, it was clear this is an approach which offers practical responses to questions which cut to the heart of how our economy operates but do not figure in the prevailing economic growth agenda in the UK:

Councillor John Cotton from Birmingham stressed the need for local government to be honest in their shortcomings, believing that only then would they be able to take on the challenges facing them. Councillor Asima Shaikh described the impacts of gentrification in her borough of Islington and how local wealth building principles have prompted the council to take action to counter the threat of rapacious investors and safeguard affordable housing and workspace. The Democracy Collaborative’s Sarah McKinley provided an international perspective citing the work of Evergreen Cooperatives in Cleveland, whilst Professor Simon Collinson emphasised the vast opportunities to be had for positive economic impact in light of CLES’ research with Birmingham Anchor Institutions. 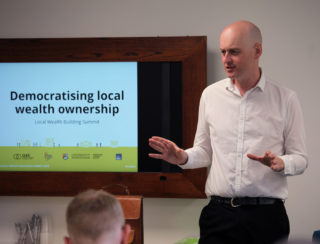 In workshops dealing with procurement, community and municipal enterprise, inclusive economic strategy, and the democratization of local wealth ownership attendees exchanged their own experiences from across the UK. Perhaps one of the best takeaways of the day came from realising just how varied the list of delegates was – with representatives from councils already deeply engaged in this work, to individual community activists looking for new ways to help rebuild a failing economic system. 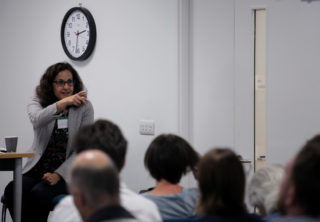 The positivity of the discussions was striking. Throughout the day we heard countless examples of people who, faced with the everyday realities of an economy that isn’t delivering shared prosperity, have devised new ways of generating and sharing wealth. Whether through community banking, worker-owned coops, community land trusts, local pension fund investment or localising of Anchor Institution supply chains, people are finding that the core practices of local wealth building are helping them to tackle fundamental questions about inequality.

Of course, challenges remain: a dominant economic model built on the extraction of wealth from people and place, inequality which pervades all communities, a chronic lack of competition in key UK markets stifling locally valuable SMEs and a dominant national policy frame which prioritises growth in GVA over human thriving. However, a decade on from the emergence of these ideas in the UK, it is clear that local wealth building is now a powerful and proven alternative. With the launch of a new publication Local Wealth Building in Birmingham and Beyond and announcements of new work with NHS Anchor Institutions and the creation of a national Centre of Excellence for Local Wealth Building, the summit beckons a new era for UK economy.