Beyond the fringe: thinking seriously about wealth, power, and ownership

by Jonty Leibowitz and Amy Clancy and Neil McInroy

A general rule of thumb with fringe events during party conference season is that unless you are serving warm food, you can rarely expect attendance figures to rise above thirty people. This figure might reduce if your event is too early in the morning, and further still if on the last day of conference. Therefore, the fact that almost one hundred party members, councillors, and activists attended our ‘Future of Public Services’ fringe at 9am on the last day of Labour Party conference (without a sandwich in sight) suggests that there is significant interest and traction on this agenda. 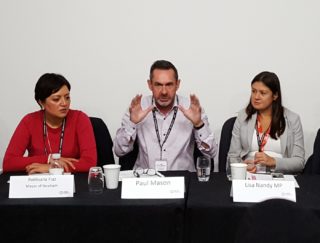 The huge appetite for new ideas was palpable across the three days in Liverpool. On Wednesday morning, there was standing room only as CLES welcomed Shadow Chancellor, Rt Hon John McDonnell MP, Lisa Nandy MP, Jim McMahon MP, Mayor of Newham, Rokhsana Fiaz OBE, and writer and broadcaster, Paul Mason to discuss how we must restore ‘public value’ to public services if we want to transform British society. 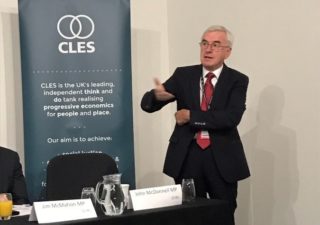 Fresh from his speech to conference in which he mapped out plans for Labour’s new Inclusive Ownership Fund, John McDonnell MP laid out the scale of the challenge ahead by telling the audience that there was the chance to transform Britain and that comes around “not just a once in a generation, but once in generations.” He reminded the audience that local authorities had a pivotal role in experimenting with alternative ideas and strategies. John also pointed out how CLES had been at the forefront of these discussions in the 1980s and that we are there again now with our local wealth building work in Preston, Islington, Kirklees and beyond.

“CLES was there in the 1980s, and you are there again now.” John McDonnell MP

The Shadow Chancellor’s comments demonstrate that CLES’ work in building local alternatives to market liberalism are part of the intellectual vanguard of new thinking. Labour leader Jeremy Corbyn also paid tribute to our pioneering work with Preston City Council in his leader’s speech, and the success of the ‘Preston Model’ was one of the hot topics of the conference, for example a glowing write-up from George Eaton of the New Statesman in his discussion of the ideas shaping the left’s future.

At our Local Wealth Building fringe on Monday afternoon, we heard from Leader of Preston City Council, Matthew Brown about the work done on the ground in Preston. Yet to characterise the entirety of the local wealth building movement as simply “the Preston Model” would be to miss the vibrancy, creativity, and differences which define this political and economic movement. Local wealth building seeks to displace the prevailing model of economic development orthodoxy. Instead, local wealth building asserts that building a good economy can only happen when it responds to the characteristics of a local area, producing new experiments and ideas in each location. 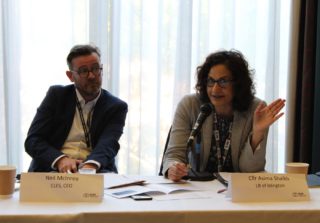 Across our panel events, we heard from frontline practitioners who have all moulded the principles of local wealth building to fit the needs of their areas. On the Monday, Islington cabinet member for Asima Shaikh spoke about how work with CLES on local wealth building in Islington has taken on significantly different characteristics to in Preston, with more focus on planning, land, and curbing the gentrification juggernaut by tackling the power of private property developers head-on. Similarly, Wednesday panellist Mayor of Newham Rokhsana Fiaz laid out  her vision for transitioning Newham away from the old idea of ‘inclusive growth’, in which citizens are treated as an after-thought in the rush to growth, and towards a more democratic vision of the ‘inclusive economy’. 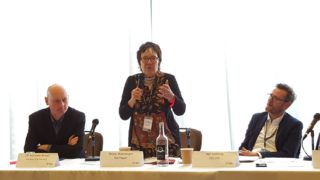 The strength of the local wealth building movement therefore comes in the fact that it is not a one-size-fits-all model to be imposed across the country, but a platform on which to experiment with the ideas and practices that will transfer wealth and power to the many. Whether it was Hiliary Wainwright speaking on the need to bring direct democracy to our cities, or Lisa Nandy developing her ideas for an inclusive economy in Britain’s towns, the speakers at CLES’ events all demonstrated the energy and commitment that is coming to define the movement for new economic thinking. We were also delighted to be joined by Shadow Secretary of State for Communities and Local Government Andrew Gwynne MP, who set out how Labour in government could provide a national policy framework to help Local Authorities take back power and control.

In the coming weeks, we will publish pieces in response to Labour’s Alternative Models of Ownership, which sits at the heart of their political vision. CLES cherishes its political independence, and will also be commenting on our fringes at the Conservative conferences too. At CLES we champion collaboration and knowledge-sharing; we believe in building a movement of thinkers and doers to change our economy. After three days at Labour Conference – from our fringe events (including our partner event with National Housing Federation and New Philanthropy Capital) to The World Transformed (where our CEO Neil McInroy spoke) – we are delighted to see signs of this movement growing and springing into life.