Last week, the Centre for Local Economic Strategies hosted a delegation from Poland on a visit to North West England. Consisting of Mayors of Cities, Chief Executives of Municipalities, Procurement Officers and Social Economy Organisations, the delegation wanted to learn about progressive local economic development activities being undertaken in the UK and explore how they could be transferred into a Polish context. 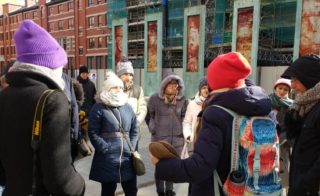 The first day sought to orienteer the delegation with the City of Manchester and its history, as well as introducing CLES and what we seek to acheive. We explained how economic growth in the City has been imbalanced and has failed to address inequality. A tour of the city centre and surrounding areas sought to explore this imbalance further.

The second day honed in on the challenges associated with the UK’s approach to economic development, together with a focused conversation upon how Greater Manchester operates in economic governance terms. We focused particularly on social innovation with a visit to the Sharp Project bringing some of the policy theory to reality.

The third day honed in on the process of procurement and how cities across the UK are utilising procurement as a lever to address wider local economic, social and environmental challenges. We talked about CLES’ ten years of work with Manchester City Council and innovation in procurement with the University of Manchester. In the afternoon, we moved onto Salford to look at an economic strategy which is truly about place and people.

Finally on day four, we travelled to Preston to explore work that has been undertaken there around local wealth building. This included a presentation from the newly formed Preston Food Partnership, which is seeking to deliver food projects across the Preston area.
A robust conversation on the final day revealed a number of key learning points for our delegation:

CLES learned a great deal from our Polish colleagues and we would like to thank them for their visit.

Matthew Jackson is the Deputy Chief Executive of CLES.