“Place is not just one of the five foundations, ‘place’ is where you dig the foundations!” – Stuart MacDonald

The new strategy starts to go beyond sector deals which have driven our approach to industry over the past few decades, setting out a framework of 5 foundations and 4 grand challenges from which a new approach to industry can be developed. The inclusion of ageing as one of the Grand Challenges is extremely positive, while ‘places’ are considered one of the 5 key foundations and the idea of Town Deals is hugely welcome. Although light on details, the strategy starts to set out mechanisms for addressing the country’s challenges (National Productivity Fund and the Shared Prosperity Fund) and deliver ‘a stronger, fairer economy.’

While the shift in tone is welcome, the strategy falls short. Given the enormity of the challenges we are facing moving forward as a nation, we need a far more fundamental shift if we are to addresses our challenges head on. Solving the ‘productivity puzzle’ and rebalancing the economy (clearly interlinked) should be the focus, but this point, while laboured throughout, does not appear fundamentally at the core of the strategy. Inequality and the increasing concentration of wealth are what prevents a spatial rebalancing of the economy and addressing this must be central to solving the productivity puzzle. Focusing on highly innovative sectors of the future is of course essential, but this is likely to benefit the places where the economy is already strong. Where is the acknowledgement that our least productive sectors need the greatest support? The laggard sectors (see figure 1) are typically far more foundational. Where is the acknowledgement of a missing regional policy, which means wealth and opportunity are not distributed?

Failing to prepare for economic reality

Although the shape of future trading relationships remains unknown, the strategy does not face up to the economic realities of Brexit. Our economy will be challenged but there is no analysis of how Brexit will impact on different places and no clear strategy to ameliorate the worst of what’s to come. It therefore fails to prepare us for the future. Industry needs confidence in the future, a transitional deal is a way off, so the industrial strategy should be serving as a commitment to those places that will be challenged most.

In terms of delivering the Industrial Strategy, local government is bypassed in favour of LEP’s outside of the Combined Authority geographies, despite acknowledging hugely variable capacity, leadership, powers, not to mention accountability. The National Audit Office March 2016 report found that LEPs are highly dependent on local authority partners for staff and expertise, and that private sector contributions have not yet materialised to the extent expected. However, austerity means that local authorities are themselves reducing their spending in areas such as economic development in favour of protecting statutory services. It is the local institutional framework, weakened by funding cuts, that needs significant reinvestment if it is to play a role in stewarding the growth of all places.

Local Industrial Strategy not local at all

Outside of the Combined Authority geography, these will be produced by LEP’s, who when faced with the last expansion of their functions (growth deals) were required to develop Strategic Economic Plans for their areas and the guidance expect(ed) these plans to be based on the drivers and barriers to growth specific to each LEP area with regard to housing, transport, skills, industry, flooding and rural economies. So the question is, how will a Local Industrial Strategy differ from what we have already, and why will it take until Brexit day (March 2019) to produce a few, focusing on areas already growing?

A fair deal for everywhere

Given a stated desire to shape a stronger, fairer economy the word ‘fairer’ actually only appears once. Reading the strategy however you cannot fail to note the predominance of the word ‘deal’, appearing 302 times in the 255-page document. For me, this now deeply embedded approach to government does not chime with fairness in all places. The art of the deal involves maintaining power dynamics in your favour, raising questions for accountability, transparency and inclusion.

A conceptual redraw: fairer for all places

For the industrial strategy to really shape a stronger, fairer economy, a conceptual redraw is required. Place is not just one of the five foundations, ‘place’ is where you dig the foundations! We need the other four – ideas, people, infrastructure and a business environment – in all places in equal measure. If the industrial strategy really wants to shape a stronger, fairer economy, fairness should be one of the Grand Challenges but sadly, the Industrial Strategy Commission’s messages around fairness have not been taken on board.

If place was more central and fairness a grand challenge, we would have a strategy that cajoles investment to the places that need it. What we have in this strategy is far short of the serious Keynesian interventionism needed for stepping in to repair markets for all. 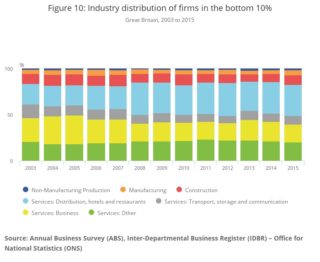