The secret to Preston’s success

by Amy Clancy and Neil McInroy 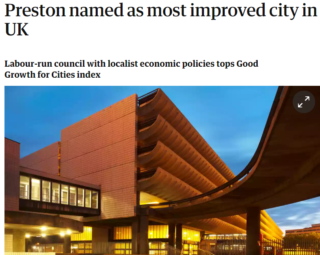 Preston has been identified as the most rapidly improving urban area in the UK to live and work, according to the 2018 Good Growth for Cities index, but what’s behind its success and how can we build on it?

While not playing an exclusive role, Preston’s adoption of a local wealth building approach to its economy has been a factor in the city’s success. In particular, by exploring the supply chains of some of the city’s largest employers and purchasers of goods and service, there has been a reconnection not with only the local economy but also with the local people at the heart of it.

For nearly 6 years, CLES have been collaborating with partners in Preston to develop this Local Wealth Building approach which places a focus on building a local economy on the foundations of social and economic justice. Since 2013, CLES has worked collaboratively with Preston’s ‘anchor institutions’ – Preston City Council, University of Central Lancashire, Lancashire County Council, Preston’s College, Cardinal Newman College, Lancashire Constabulary, Community Gateway Association – to look at how their money is spent and, wherever possible, to redirect it back to the local economy through the use of suppliers with strong local roots and a commitment to social value. This work has directly impacted on employment rates, encouraged behaviour change within, and cooperation across, institutions, and led to a greater understanding of the local economy. The impact of this collaboration has been significant, leading to over £70 million being redirected back into Preston’s economy since 2013.

This progress has been made steadily over time. It is the result of the long-term commitment of multiple partners willing to put in “hard graft” and be pioneers of an alternative approach to economic development, despite potential perils. While this work has been, and continues to be, firmly led by Preston City Council and its leader Cllr Matthew Brown, its success is based on continuing collaboration and on deliberate and intentional day to day changes in behaviour and practice across the anchors. It is a bootstrap economic policy informed by need, the full potential of which is yet to be realised.

This successful work with anchor institutions in Preston is just one part of the local wealth building agenda, and Preston is just one example of a municipality which is challenging traditional economics with a more considered, common sense approach that prioritises local people and places. Preston is part of an international municipalist movement that is finding the courage to take back ownership of its local economy and prioritise its people’s interests rather than those of extractive corporates.

As part of the local wealth building municipalist movement, CLES is now working in Birmingham, Bury, Calderdale, Islington, Kirklees, Leeds, Manchester, Oldham, Rochdale, Salford, Southampton, Wakefield, and Wirral to develop tailored local wealth building strategies. We are also in discussion with the devolved governments of Wales and Scotland to further the agenda across the UK, and also in Canada and New Zealand where word has spread.

CLES’ work developing practical examples of local wealth building began in the UK in 2005, and has been inspired by initiatives pioneered by Mondragon in the Basque Country, and by the Democracy Collaborative in Cleveland in the US. This work now includes 4 key principles: procurement, anchor workforce, anchors’ land, property and assets, and developing more plural and democratic ownership of the economy. Every place we are working in has its own bespoke blend of this activity, reinforcing the point that Preston should be seen not as a model or a blueprint, but rather as one inspiring example of how the principles can be applied.

The work in Preston continues. Far from luxuriating in the many plaudits and headlines, it is exploring new ways to further embed local wealth building in its local economy. This includes deepening its work on procurement, and also developing new democratic models of ownership, such as community banks, platform cooperatives and municipal energy schemes. In Preston, as in other places, there is still much work to do to create a more just and successful economy.

Developing a network of action and support for UK cities

To accelerate the adoption of Local Wealth Building policy and practice in the UK, CLES has been awarded funding by Barrow Cadbury Trust to develop a Centre of Excellence – you can find out more here.