What next for the Local Wealth Building movement?

Local wealth building has emerged as a powerful tool to democratise our economy and create wealth for all. From Barcelona and Bologna to Preston, Islington, and Kirklees, the movement is growing and helping communities take back control. Jonty Leibowitz and Tom Lloyd Goodwin suggest that whilst now is a good time to recognise and celebrate these achievements, we must also be restless and ambitious, asking ourselves – ‘what next’ for this dynamic movement?

It is no surprise that local wealth building has begun to gain traction in the last decade. Across the world, communities are beginning to fight back against a political and economic system in which wealth is hoarded by a narrow few, public services are cut to the bone, and the many are consigned to lives of economic precarity and political disenchantment.

Local wealth building has flourished because it offers a powerful corrective to the politics of misery imposed by market neoliberalism. Whether it be reversing post-industrial decline in Preston, or defeating the gentrification juggernaut in Islington, local wealth building has become a way for communities to fight back and reclaim their communities from the extractive power of organised capital.

Put simply, local wealth building aims to reorganise and control the local economy so that wealth is not extracted but broadly held and generative, rooted locally, so that income is recirculated, communities are put first and people are provided with opportunity, dignity and well-being. Through this process, we see a democratic, social and economic movement, which seeks to provide resilience where there is risk and local economic security where there is precarity.

“CLES has developed an extensive toolkit for helping local authorities embed Local Wealth Building in their local economies, and seen results in all corners of the United Kingdom and across to Europe.”

For the last ten years, CLES has been at the forefront of this work. We’ve laid out the intellectual argument for why we need to build community wealth, but more importantly we’ve backed this up with practical, radical work. CLES has developed an extensive toolkit for helping local authorities embed Local Wealth Building in their local economies, and seen results in all corners of the United Kingdom and across to Europe. We’ve also developed a network of thinkers, doers, activists, policymakers, and campaigners to build momentum for this cause, and seen Local Wealth Building go from a niche policy dream to one major political parties now endorse, for example UK Labour’s recently-formed Community Wealth Building Unit.

In brief, CLES’ approach is based on the role of ‘anchor institutions’- large established organisations like local authorities, schools and universities which are rooted to their local communities, and therefore should be immune to the powers of extractive capitalism.

Our approach has been refined into four key strategies, which we encourage anchors to nourish:

Progressive procurement can develop dense a local supply chain of local enterprises, SMEs, employee owned businesses, social enterprises, cooperatives and other forms of community ownership. This type of procurement is locally enriching because these types of businesses are more likely to support local employment and have greater propensity to retain wealth and surplus locally.

Often the biggest employers in a place, the approach that Anchors take to employment can have a defining effect on the employment prospects and incomes of local people. Recruitment from lower income areas, commitment to paying the living wage and building progression routes for workers are all examples of the actions anchors can take to stimulate the local economy and bring social improvements to local communities.

Anchors are often major land holders and can support equitable land development (through establishment of Community Land Trusts) and development of under-utilised assets for community use. In terms of financial investments, directing pension funds to local investment priorities can bring transformative capital to locally rooted enterprises.

4. Democratic ownership of the local economy

At the heart of Local Wealth Building is the principle that wealth is broadly held. Cooperatives, mutually owned businesses, SMEs, municipally owned companies and local banks enable the wealth generated in a community to stay in that locality and play a vital role in counteracting the extraction of wealth.

With these strategies, and working with progressive administrations across the UK, we have helped transform local economies. Over a five-year period, Preston saw local spend and investment increase by £70m in the city and by £200m in the wider Lancashire area. In Birmingham, CLES held the UK’s first Local Wealth Building Summit in July 2018.  It is only right that we celebrate these successes, and share the stories which made them happen. The fact that the ‘Preston Model’ is now internationally renowned is a testament to appetite out there for radical ideas which challenge the status quo.

“…we cannot get punch-drunk on our early successes: we must be sober, look to the horizon, and ask ourselves – what next?”

Yet progressive change will never come by standing still – nor will it come by believing that we have achieved the perfect ‘model’, which we only need export in to other areas. The spirit of Local Wealth Building must be one of restless energy and inquiry, in which we constantly push the boundaries of what we think to be possible. In other words, we cannot get punch-drunk on our early successes: we must be sober, look to the horizon, and ask ourselves – what next?

‘What next’ matters because the local wealth building movement will only flourish if we have the courage to ask difficult questions. We have identified three areas of potential enquiry:

1. One size cannot fit all

Local wealth building must always be a bespoke process, tailored for each local economy. We know that the Preston Model might work for Preston, but what is the Hackney Model going to look and feel like? How can we encourage local authorities to share best practice, yet also maintain their differences?

Local wealth building is inherently local, but we cannot ignore the national policy framework. With the Labour Party showing genuine signs of support, we must now ask ourselves: what would we like to see from a national government in order to let the movement flourish?

Finally, we must see local wealth building as one piece of a broader vision for offering a political and economic alternative to the misery of our failed system. Alongside this movement, we must campaign for radical transfers of power to citizens on a local level. The success of movements such as Barcelona En Comu shows the way – local wealth building is one of many aspects of the ‘new municipalist’ agenda, which we must champion and advance.

The task ahead is therefore to widen our field of vision and push local wealth building to the next level. To mobilise the adoption of local wealth building policy and practice in the UK, CLES has recently been awarded funding by Barrow Cadbury Trust to develop a centre of excellence, which will aim to refine and develop the diverse experiences and thinking taking place around this agenda and translate this into practical action.

Moreover, we want to spark a debate about the future of this vibrant, dynamic movement – in order to make sure we stay intellectually and organisationally alive to the challenges of the future. We’re starting at Labour Conference on Monday 24th September with a panel debate featuring our CEO Neil McInroy, Shadow Secretary of State for Housing, Communities and Local Government Andrew Gwynne MP, Cllr Asima Shaikh of Islington, Cllr Matthew Brown of Preston, and Hilary Wainwright, editor of Red Pepper magazine. You can see details below. Join us, and together we can help chart a course for the next ten years of local wealth building. 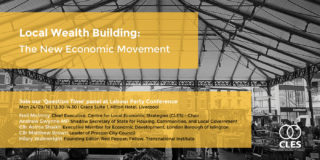