Rather than seeing the collapse of Wonga as the end of the payday loan era we need to question the underlying factors that lead people to rely on such providers, writes David Burch and Matthew Todd.

Wonga did not collapse because of a lack of demand for fast credit. Instead, new regulations – such as limits on the daily interest rate and the total amount that borrowers could pay in interest and fees – created problems for its business model. Indeed, the macroeconomic factors that created the boom of payday lenders persists and there are worrying signs that, despite Wonga’s collapse, financial distress has risen – the number of people contacting the debt advice charity StepChange for assistance is at record levels, and the rate of personal insolvencies has also increased.

The growth of insecure employment

A principal factor in the continued crisis of Britain’s personal finances is the nature of modern work. This includes the growth of insecure employment. Research by the TUC finds that 3.8 million people – one in nine British workers – are now stuck in precarious forms of employment such as zero-hours contracts, low-paid self-employment or agency work. A feature of this type of employment is a degradation of traditional employment rights such as holiday pay, sick pay, payment for time spend travelling between calls, and regular shift patterns.

A decline in real wages

In addition, low pay is becoming increasingly prevalent. Economic theory states low unemployment causes wages to increase, however wages have done worse in Britain lately than almost anywhere in the rich world, as the graph by The Economist, below, illustrates. In part, this is caused by policies such as the public sector pay cap. 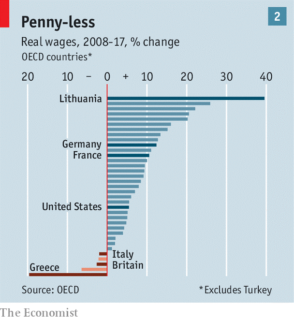 The demand for fast credit

Unless the macroeconomic root causes of the personal debt crisis are tackled, demand for credit will continue and people will continue to suffer, with or without Wonga.