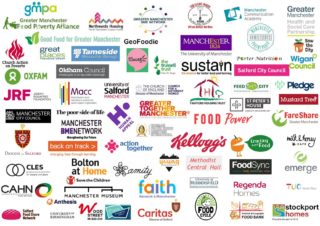 Food Poverty is a significant challenge in Greater Manchester. Over 200,000 children experience poverty in Greater Manchester, and food bank use is higher than in other areas. Councils have had their budgets slashed, and the NHS is under severe pressure from food poverty related conditions, with poor diet contributing to diabetes, cancer, cardio vascular disease, and obesity as well as malnutrition.

On Monday 4th March, CLES Senior Researcher Matthew Todd attended the launch of the Food Poverty Action Plan for Greater Manchester at Methodist Central Hall in Manchester. The Action Plan has been co-produced with input from over 100 individuals and organisations (a selection of whom are shown on the graphic) and was coordinated by GM Poverty action.

The Food Poverty Action Plan for Greater Manchester sets actions to reduce and prevent food poverty; build resilience and support communities to plan and adapt to the challenge of food poverty; and address the structural and economic issues that underlie food poverty, such as the benefits system and precarious and low-paid employment.

As with any plan, the success of this initiative depends on action, and GMPA are calling for individuals and organisations to get involved. To find out more, contact food@gmpovertyaction.org.