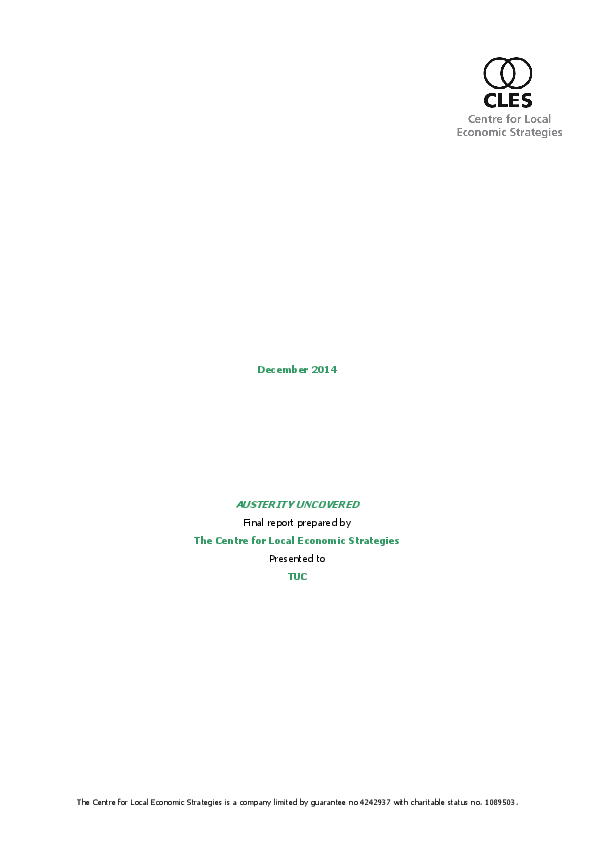 This report is based on research by the Centre for Local Economic Strategies (CLES), commissioned by the TUC. It is designed to look at the impacts of austerity, focusing upon how changes in publically funded services affect both people and places across the country now and in the years to come.

While spending cuts have affected public services across the board, the research has focussed primarily on the impact on adult social care and children’s services, looking at changes in service provision resulting from cuts in nine local case studies across England (covering Bedford, Blackpool, Bradford, Derby, Devon, Dudley, Islington, Reading, and Redcar and Cleveland).

This report asserts that a deep and prolonged period of austerity is damaging the nation’s present and future, weakening service provision and undermining many aspects of the universal welfare state that plays an integral part in sustaining communities and social cohesion.

Evidence suggests that as the economy slowly emerges from its crisis, a social recession is being left in its wake. A funding crisis is growing from the NHS to local government that is unsustainable and could fundamentally change the nature of public services if unaddressed. As such, the fact that the government’s public spending cuts are planned to extend well beyond 2015 is a matter of grave concern.

It is important to note that the great majority of the population are impacted to some degree by austerity. This might be as simple as pot holes not being fixed, but also, for instance, children’s centre services being reduced (as highlighted in several case studies) as universal provision is cut back, increasing charging for leisure facilities, or cutting back library provision. It can impact on all families in all places.