by Gareth Brown and Stephanie Nixon 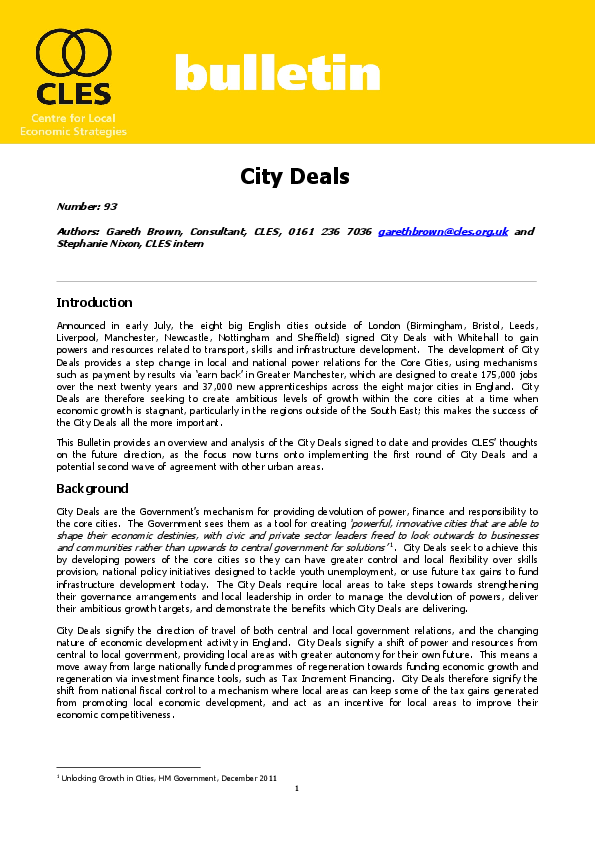 Announced in early July, the eight big English cities outside of London (Birmingham, Bristol, Leeds, Liverpool, Manchester, Newcastle, Nottingham and Sheffield) signed City Deals with Whitehall to gain powers and resources related to transport, skills and infrastructure development.  The development of City Deals provides a step change in local and national power relations for the Core Cities, using mechanisms such as payment by results via ‘earn back’ in Greater Manchester, which are designed to create 175,000 jobs over the next twenty years and 37,000 new apprenticeships across the eight major cities in England.  City Deals are therefore seeking to create ambitious levels of growth within the core cities at a time when economic growth is stagnant, particularly in the regions outside of the South East; this makes the success of the City Deals all the more important.

This Bulletin provides an overview and analysis of the City Deals signed to date and provides CLES’ thoughts on the future direction, as the focus now turns onto implementing the first round of City Deals and a potential second wave of agreement with other urban areas.