From Community Garden to Westminster 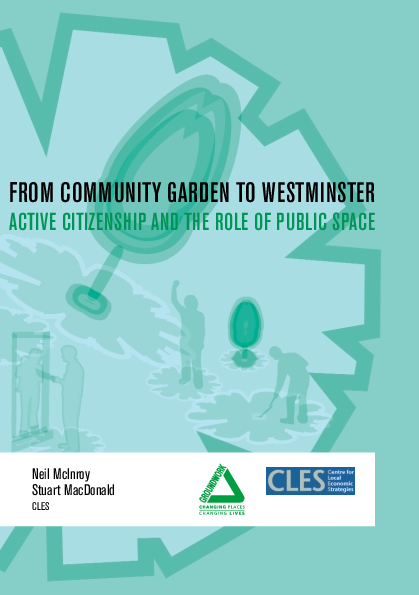 It reveals that involvement in a public space or community garden increases individuals’ knowledge of politics and aids understanding of citizenship. Today, by and large, we are passive citizens; decisions about public services and their delivery are made on our behalf, with relatively little input from individuals or communities. Nonetheless, the involvement of citizens in their local community, both formally and informally, has been identified by the Home Office as a “centre-piece of the government’s reform agenda for the coming years” and by the ODPM as key to creating sustainable communities, reforming public services and reinvigorating local leadership.

The research draws on the experiences of eight individuals’ involvement in community programmes run by Groundwork, a leading environmental regeneration charity, in three communities in the North West of England.

This report argues that public space is uniquely positioned to facilitate the development of active citizenship. It can act as a space for citizenship, as a medium by which debates about citizenship can take place and as a site of debate and interaction.