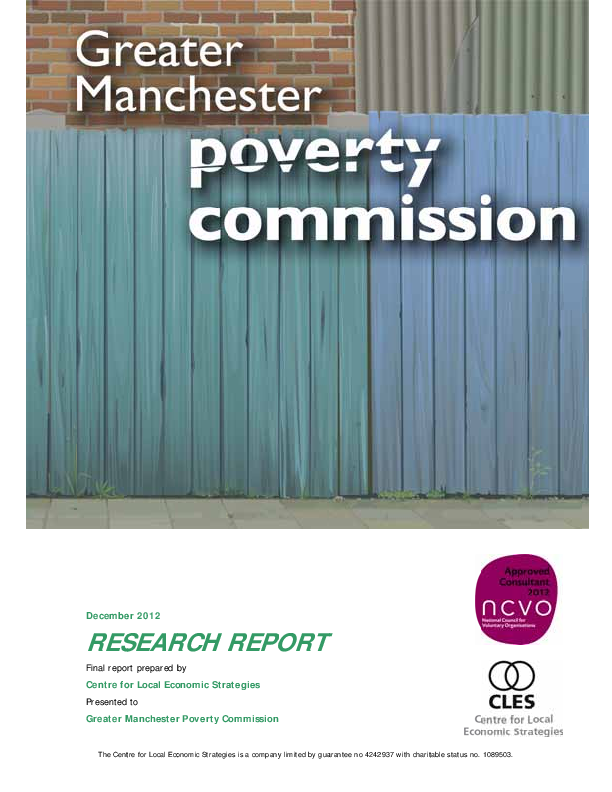 The Centre for Local Economic Strategies collated the evidence for the Greater Manchester Poverty Commission’s  findings which have been published in 2 reports.

The Greater Manchester Poverty Commission published its findings on 15 January 2013 and calls for special measures which will assist more than 600,000 Greater Manchester residents who are experiencing the effects of extreme poverty. In addition, it calls for action to prevent nearly 1.6 million people (nearly half the population of Greater Manchester) sliding in to deeper poverty.

The Commission found that those living in poverty face hunger, isolation, fear and frustration. The largest group, living on the lowest incomes, are families with children and home owners. Many of those living in poverty are in part-time work, low waged and suffer from fuel poverty, food poverty and have reduced access to basic services such as transport and technology.

In response to personal testimonies, from those affected by poverty, and as a result of robust research, the Commissioners have produced two reports:

The key recommendations are:

The Commissioners call for the introduction and development of social enterprises in the banking, food and energy sectors.

Local authorities and others are encouraged to set up their own energy provider companies, credit unions and bulk food purchase ‘supermarkets/foodbanks’. This would see shareholder profit replaced with reduced prices, social responsibility and greater benefit to the local community.

To improve the availability of fresh fruit and vegetables, it is recommended that food be grown and shared in communities – reducing waste and ensuring it gets to those in need.

The Commissioners call for steps to be taken to improve access to key services for those living in poverty. This includes the expansion of free transport and the provision, by social enterprises and local authorities, of affordable broadband and IT equipment.

There is also a request for free legal advice to be reviewed, optimized and developed and for an increase in the availability and provision of quality childcare. Access to services should be tested to ensure that those experiencing poverty can access them.

The Commissioners ask that the current economic growth agenda should have realistic plans to address poverty and call on the private and statutory sectors to promote the adoption of a Living Wage, as opposed to a minimum wage, to raise standards of living. The Living Wage is about £7.45 per hour and reflects people’s needs for an adequate lifestyle.

The Government’s City Deal development program should be enhanced by a Social City Deal which would give more control to local authorities over a local welfare agenda and reduce the risk of any top-down approach to growth failing to focus or alleviate poverty.

The commissioners wish to see further work being done to create a voice for all Greater Manchester, establishing an on-going poverty working group and the development of a Greater Manchester Index, so that the extent of poverty across Great Manchester can be known and understood.

There is a need to join forces with Fairness Commissions in Liverpool, York, Newcastle and London to campaign and lobby on common issues.

About the Greater Manchester Poverty Commission

Using the evidence and testimony provided by individuals and organisations, the Greater Manchester Poverty Commission (GMPC) has identified the key components of poverty within the Greater Manchester conurbation and suggests solutions that will improve the lives of people who live in poverty. It will also challenge those who can make a difference to respond.

Initiated by a small group of Greater Manchester MPs, the Commission includes representatives from key sectors such as: community and faith; advice and welfare; trades unions; social housing; business; public, and the media. The Bishop of Manchester chaired of the Commission. GMCVO is part of the secretariat supporting the Commission.

Relevant evidence has been sought from as many people as possible, with the Commission particularly interested in receiving submissions which addressed the following questions:

These questions were also used in participatory events held across Greater Manchester from May until the end of October 2012.

The reports, along with further information, can be viewed on the Greater Manchester Poverty Commission website here.