Implications of the Queen’s speech 2015 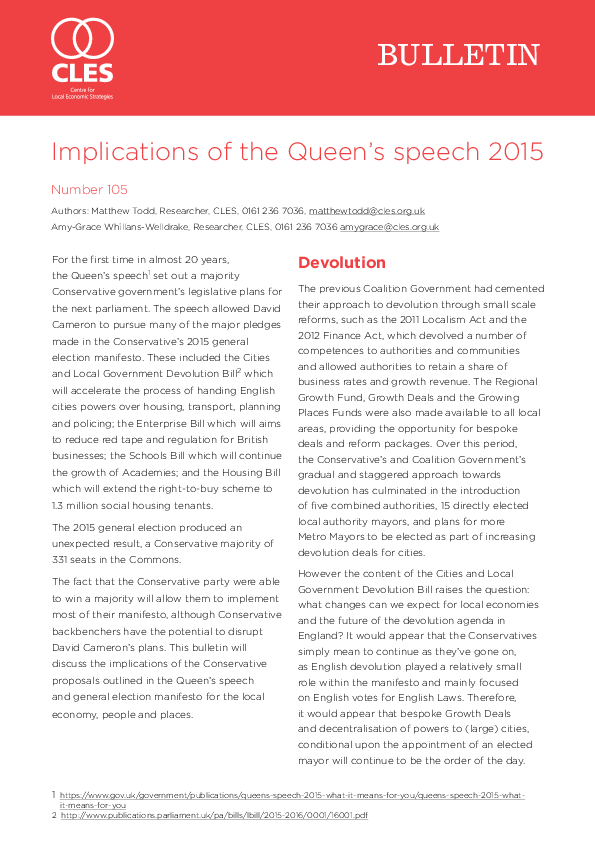 For the first time in almost 20 years, the Queen’s speech set out a majority Conservative government’s legislative plans for the next parliament. The speech allowed David Cameron to pursue many of the major pledges made in the Conservative’s 2015 general election manifesto. These included the Cities and Local Government Devolution Bill which will accelerate the process of handing English cities powers over housing, transport, planning and policing; the Enterprise Bill which will aims to reduce red tape and regulation for British businesses; the Schools Bill which will continue the growth of Academies; and the Housing Bill which will extend the right-to-buy scheme to 1.3 million social housing tenants.

The 2015 general election produced an unexpected result, a Conservative majority of 331 seats in the Commons.

The fact that the Conservative party were able to win a majority will allow them to implement most of their manifesto, although Conservative backbenchers have the potential to disrupt David Cameron’s plans. This bulletin will discuss the implications of the Conservative proposals outlined in the Queen’s speech and general election manifesto for the local economy, people and places.