B64: New era for economic development? Implications of the Local Democracy, Economic Development and Construction Bill 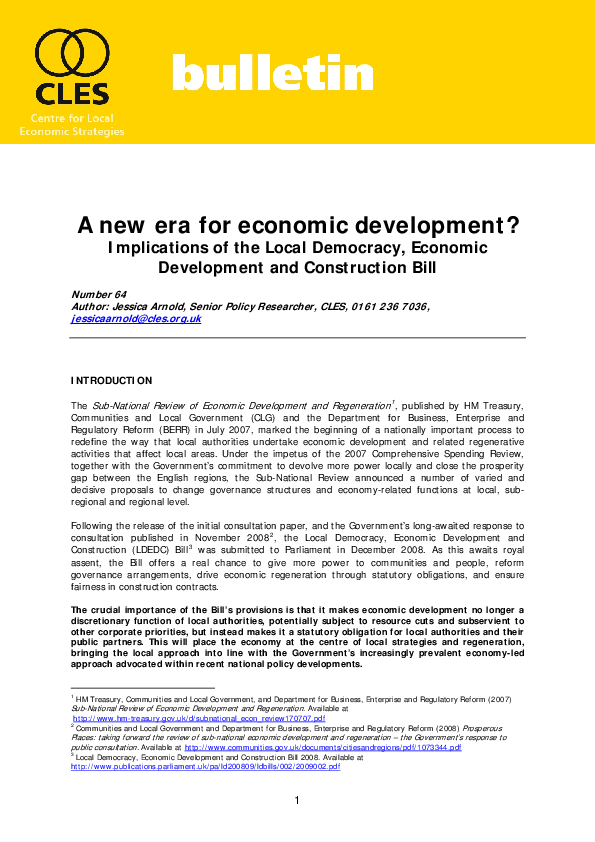 Following the release of the initial consultation paper, and the Government’s long-awaited response to consultation published in November 2008, the Local Democracy, Economic Development and Construction (LDEDC) Bill was submitted to Parliament in December 2008. As this awaits royal assent, the Bill offers a real chance to give more power to communities and people, reform governance arrangements, drive economic regeneration through statutory obligations, and ensure fairness in construction contracts.

Prior to LDEDC Bill becoming law and the final Government guidance being produced to accompany this, the Government published three policy statement papers in January 2009 that set out how they intend the key proposals of the Bill to be implemented (and hence what the guidance on making these changes is likely to look like when released). These papers are:

This CLES Bulletin discusses the contents of these policy statements and the proposals drawn from the LDEDC Bill; the concerns we have regarding their implementation and likely success; and what these proposals, individually and combined, mean for the future of economic development, regeneration and governance in England.