NHS reforms – Are they good for our economy’s health? 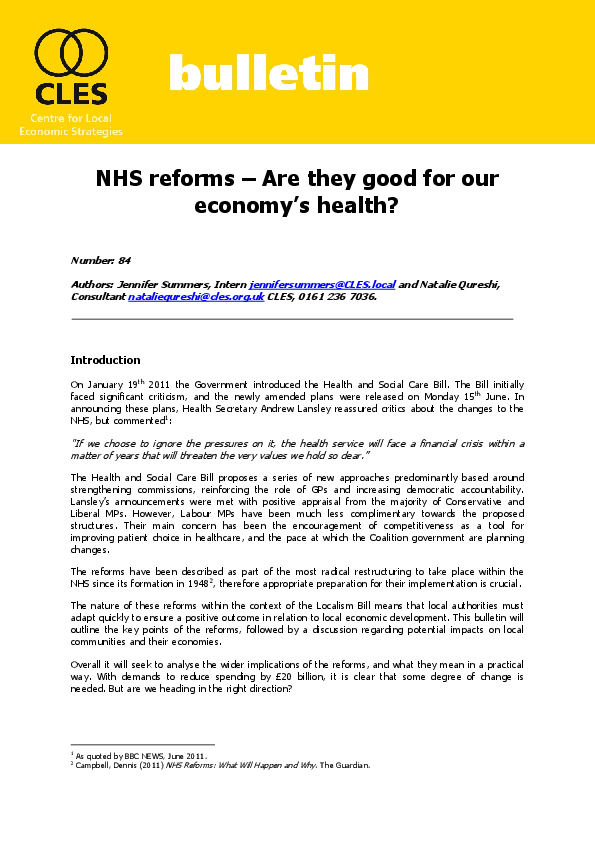 On January 19th 2011 the Government introduced the Health and Social Care Bill. The Bill initially faced significant criticism, and the newly amended plans were released on Monday 15th June.

The Health and Social Care Bill proposes a series of new approaches predominantly based around strengthening commissions, reinforcing the role of GPs and increasing democratic accountability. The reforms have been described as part of the most radical restructuring to take place within the NHS since its formation in 1948, therefore appropriate preparation for their implementation is crucial.

The nature of these reforms within the context of the Localism Bill means that local authorities must adapt quickly to ensure a positive outcome in relation to local economic development. This bulletin will outline the key points of the reforms, followed by a discussion regarding potential impacts on local communities and their economies.

Overall it will seek to analyse the wider implications of the reforms, and what they mean in a practical way. With demands to reduce spending by £20 billion, it is clear that some degree of change is needed. But are we heading in the right direction?