Is it time to challenge the north/south divide debate? Inequality knows no compass points

by Neil McInroy and Matthew Jackson 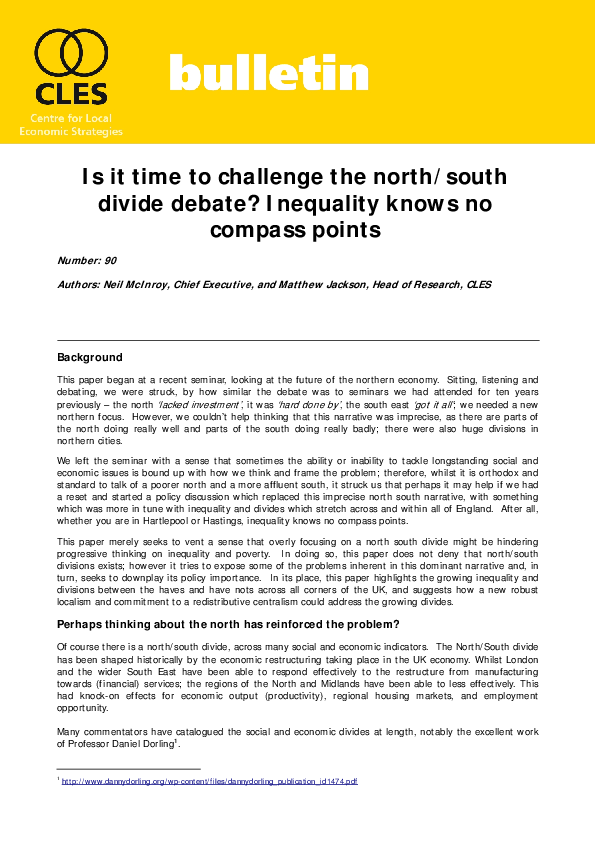 This paper began at a recent seminar, looking at the future of the northern economy.  Sitting, listening and debating, we were struck, by how similar the debate was to seminars we had attended for ten years previously – the north ‘lacked investment’, it was ‘hard done by’, the south east ‘got it all’; we needed a new northern focus.  However, we couldn’t help thinking that this narrative was imprecise, as there are parts of the north doing really well and parts of the south doing really badly; there were also huge divisions in northern cities.

We left the seminar with a sense that sometimes the ability or inability to tackle longstanding social and economic issues is bound up with how we think and frame the problem; therefore, whilst it is orthodox and standard to talk of a poorer north and a more affluent south, it struck us that perhaps it may help if we had a reset and started a policy discussion which replaced this imprecise north south narrative, with something which was more in tune with inequality and divides which stretch across and within all of England.  After all, whether you are in Hartlepool or Hastings, inequality knows no compass points.

This paper merely seeks to vent a sense that overly focusing on a north south divide might be hindering progressive thinking on inequality and poverty.  In doing so, this paper does not deny that north/south divisions exists; however it tries to expose some of the problems inherent in this dominant narrative and, in turn, seeks to downplay its policy importance.  In its place, this paper highlights the growing inequality and divisions between the haves and have nots across all corners of the UK, and suggests how a new robust localism and commitment to a redistributive centralism could address the growing divides.