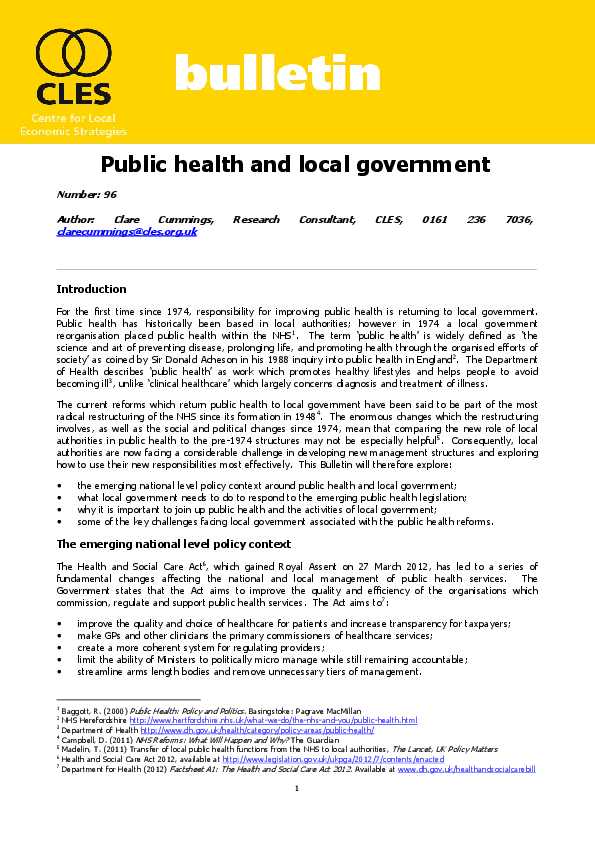 For the first time since 1974, responsibility for improving public health is returning to local government. Public health has historically been based in local authorities; however in 1974 a local government reorganisation placed public health within the NHS.  The term ‘public health’ is widely defined as ‘the science and art of preventing disease, prolonging life, and promoting health through the organised efforts of society’ as coined by Sir Donald Acheson in his 1988 inquiry into public health in England.  The Department of Health describes ‘public health’ as work which promotes healthy lifestyles and helps people to avoid becoming ill, unlike ‘clinical healthcare’ which largely concerns diagnosis and treatment of illness.

The current reforms which return public health to local government have been said to be part of the most radical restructuring of the NHS since its formation in 1948.  The enormous changes which the restructuring involves, as well as the social and political changes since 1974, mean that comparing the new role of local authorities in public health to the pre-1974 structures may not be especially helpful.  Consequently, local authorities are now facing a considerable challenge in developing new management structures and exploring how to use their new responsibilities most effectively.  This Bulletin will therefore explore: