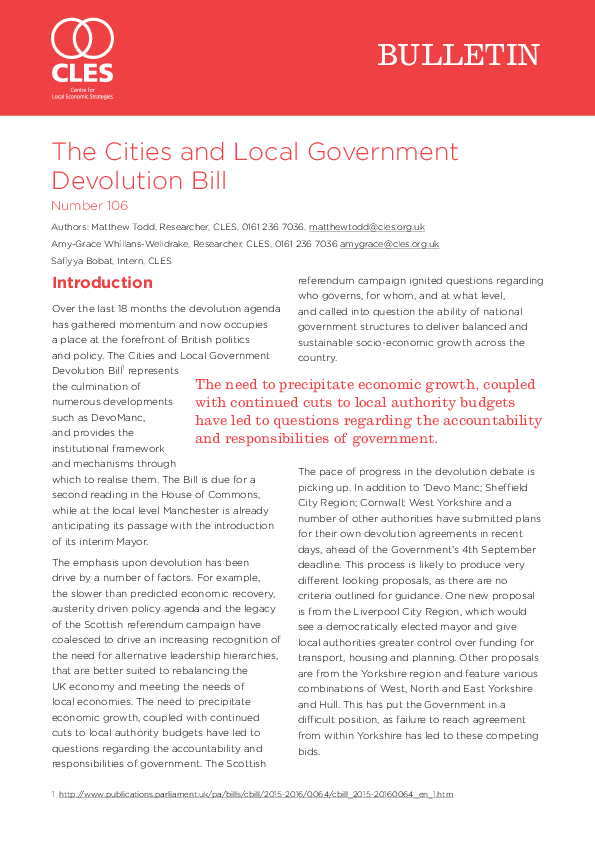 Over the last 18 months the devolution agenda has gathered momentum and now occupies a place at the forefront of British politics and policy. The Cities and Local Government Devolution Bill represents the culmination of numerous developments such as DevoManc, and provides the institutional framework and mechanisms through which to realise them. The Bill is due for a second reading in the House of Commons, while at the local level Manchester is already anticipating its passage with the introduction of its interim Mayor.

The emphasis upon devolution has been driven by a number of factors. For example, the slower than predicted economic recovery, austerity driven policy agenda and the legacy of the Scottish referendum campaign have coalesced to drive an increasing recognition of the need for alternative leadership hierarchies, that are better suited to rebalancing the UK economy and meeting the needs of local economies. The need to precipitate economic growth, coupled with continued cuts to local authority budgets have led to questions regarding the accountability and responsibilities of government. The Scottish referendum campaign ignited questions regarding who governs, for whom, and at what level, and called into question the ability of national government structures to deliver balanced and sustainable socio-economic growth across the country.

The pace of progress in the devolution debate is picking up. In addition to ‘Devo Manc; Sheffield City Region; Cornwall; West Yorkshire and a number of other authorities have submitted plans for their own devolution agreements in recent days, ahead of the Government’s 4th September deadline. This process is likely to produce very different looking proposals, as there are no criteria outlined for guidance. One new proposal is from the Liverpool City Region, which would see a democratically elected mayor and give local authorities greater control over funding for transport, housing and planning. Other proposals are from the Yorkshire region and feature various combinations of West, North and East Yorkshire and Hull. This has put the Government in a difficult position, as failure to reach agreement from within Yorkshire has led to these competing bids.

This CLES bulletin does three things. Firstly it summarises the content of the Cities and Local Government Devolution Bill; secondly it examines the fiscal, social and democratic implications of the Bill for people and place; and thirdly it outlines ways in which CLES feels that the Bill should be adapted to ensure positive economic, social and democratic outcomes for all.