We need a real deal on devolution

by CLES and SPERI 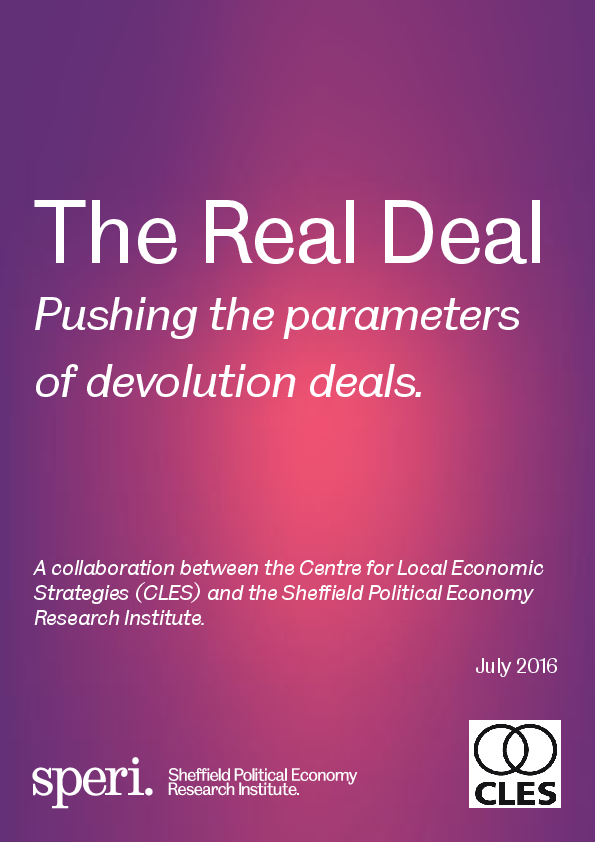 Devolution is a great opportunity. After years of oppressive centralisation, the current devolution deals offers many local authorities and combined authorities a chance to break free and forge their own distinctive economic and social destiny.

However devolution is not without significant risks and challenges. Our new joint paper ‘The Real Deal: Pushing the parameters of devolution deals’, a collaboration between the Centre for Local Economic Strategies (CLES) and the Sheffield Political Economy Research Institute (SPERI) explores the restrictions in the current devolution agenda, and presents ideas for a new settlement to make devolution a force for progressive change.

For us it is increasingly clear that present devolution – whilst a unique opportunity – is flawed. Whilst the deals have started to reverse some of the problems of over-centralisation, devolution has been too constrained by the Treasury’s economic and social model, and cowed by the ongoing austerity, in which the poorest areas have suffered the most.   As a result of such constraints devolution has been shaped by a limited deal-making process of narrow negotiations with Whitehall, which seems to be stacked in favour of the status quo, and limited in terms of what it deems important. As such, the ability of local authorities to think and act progressively has been squeezed. What we need instead is a new devolution settlement between central and local government that empowers local areas to forge their own answers to the challenges they face. We need a real deal.

This publication starts to think through what real devolution deals could look like and potentially herald a progressive and enduring social, economic, democratic and environmental future.  In our report we  outline eleven sets of ideas for further devolution deals and makes recommendations for employment policy, transport, energy and environmental policy, housing and land use, health, procurement, local banking, higher education, lottery funding and the democratic process.