B56: What is the role of the new local performance framework in promoting cohesive communities? 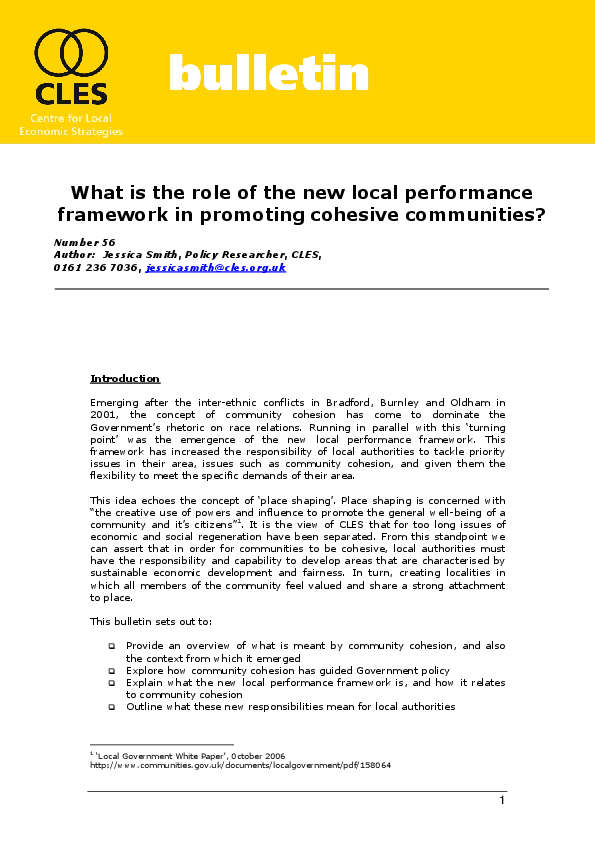 Emerging after the inter-ethnic conflicts in Bradford, Burnley and Oldham in 2001, the concept of community cohesion has come to dominate the Government’s rhetoric on race relations. Running in parallel with this ‘turning point’ was the emergence of the new local performance framework. This framework has increased the responsibility of local authorities to tackle priority issues in their area, issues such as community cohesion, and given them the flexibility to meet the specific demands of their area.

This idea echoes the concept of ‘place shaping’. Place shaping is concerned with “the creative use of powers and influence to promote the general well-being of a community and it’s citizens”1. It is the view of CLES that for too long issues of economic and social regeneration have been separated. From this standpoint we can assert that in order for communities to be cohesive, local authorities must have the responsibility and capability to develop areas that are characterised by sustainable economic development and fairness. In turn, creating localities in which all members of the community feel valued and share a strong attachment to place.

This Bulletin sets out to: