In a recent report, we at Cles, in collaboration with Macc (Manchester’s local community and voluntary sector support organisation), explore how we could build a civil economy in Manchester and the role of social capital in that. Manchester has had fantastic success in growing the size of its economy. However, as in many cities, a new wave is required to ensure that economic success reaches all and that the growth is sustainable.

The ideas in the report are conceptually robust but simple. At the heart of the local civil economy idea is a need for a deeper set of collaboration and mutual coexistence across all three sectors: public (local state), private and the social sector.

In this, all three sectors have essential qualities. Qualities which need to work together. The private sector brings exchange and wealth creation. The public sector and the local state bring equality and a degree of redistribution which provides some public goods and services which are not provided by the market. The social sector brings civic ties, and social diversity imbued with reciprocity and solidarity. 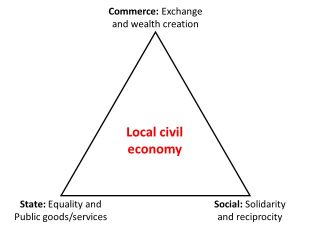 At present the social is often seen as a detached or weaker element of an economy. To build a civil economy we must hone on the civic ties, solidarity capital and reciprocity that bind us together in a place. These should be seen as essential qualities for any economy.

Furthermore, a supply of innovation comes from local citizens. However, unemployment, poverty and social exclusion are stony ground for social productivity and creativity. Social issues which place a high demand on public services are not just a budget issue, they act as an economic ball and chain, dragging an economy down. Successful economic development and public service reform needs the poor to be not poor.

Of course local economic development does give some consideration to jobs and associated social benefits as an outcome. However, we know that trickle down is too meagre and a rising tide will not lift all boats. Therefore, we need to raise practice and view social capital, social life and inclusion as a fundamental input to economic success. The social sphere ain’t ‘fluffy’ and detached from the hard business of economics, it’s the very basis to what an economy is about!

None of this is beyond our ken. As the growing readership of these New Start pages suggest, and as our recent work on thriving places (and blog) suggests, there is a movement across the social, public and commercial sectors. A growing number know that that crude capitalism fails places and that a concentration of power and resource is a bad thing.

The rise of community wealth building, ideas of place resilience, alternative financial models, the appreciation of a social return on investment, new forms of exchange, production and consumption co-operatives and mutuals, social businesses, advanced forms of philanthropy and new altruistic practices, all demonstrate this creative hunger and energy.

I think a positive future may be beckoning. We can build a civil economy, but we can only do it in collaboration. We must replace sectoral ‘us and them’ relationships with a new generosity, glued by a shared love of place.

The original article can be read on the NewStart website here.