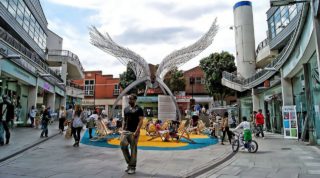 Following years of austerity, wealth extraction and an economy incapable of responding to social needs, the global New Municipalist movement is taking root here in the UK.  In a new publication, New Municipalism in London, the Centre for Local Economic Strategies (CLES) introduces this new concept and, with the London Boroughs of Islington, Hackney and Camden, shows how it is being taken forward.

Like many world cities, London is both a beacon of extravagant wealth (London is the fifth wealthiest city in the world) and grinding poverty (27% of London’s citizens live in poverty).  Huge levels of speculative investment and gentrification are pricing ordinary Londoners, communities and businesses out of their own city.  Councils reeling from austerity and cuts to vital services are now contending with hollowed out local economies, denuded services and social pain.  New Municipalism is a deep intentional fightback against this status quo.  It rejects trickle down  inclusion after growth, and recognises that service transformation and ‘more for less’ system change is inadequate.

New Municipalism is not a mere re-invoking of a Victorian Municipalism or a Municipal Socialism. It is a dynamic global movement, which threatens to be even more transformative, going beyond the local state to a deeper consideration of power and the role of institutions.

There are three key components to this new municipalism from the UK perspective. The first element is citizen power, whereby the local state as an institution breaks down barriers to citizens exercising their power and enables, coordinates and upscales social innovation from community organisation and social enterprises. Second, municipal power.  New municipalism rejects the process of hollowing out the local state and outsourcing. Instead, the local state harnesses its own municipal power, and recognises that there are fundamental public goods and services, such as care and energy, that should not be outsourced to the market, but should be fairly priced and accessible to all citizens. Third, democratising the economy.  Municipalist economic policy breaks with the orthodoxy of corporate investments, large-scale property redevelopments and wealth extraction. Instead, it focuses on creating a generative economy that is fair, plural and democratic. It facilitates new ownership models such as cooperatives and municipal enterprises that lock in wealth, fairer wages, higher workers’ control and more environmental and social responsibility.

“The publication serves to highlight a powerful movement in which clear political intent is prompting officers and departments to innovate; harnessing scarce resources, protecting core services, stoking local citizen power, and trying to slow the juggernaut of gentrification and wealth extraction, which plague so much of our capital city.”

New  Municipalism in London conveys how this interventionist journey has begun in three London boroughs, and frames that within new municipalism. It includes contributions from the leaders of Islington (Cllr Richard Watts), Hackney (City Mayor Philip Glanville) and Camden (Cllr Georgia Gould). Whilst the journeys are at different stages and strengths, all three boroughs share a broad desire to intentionally step in and do their utmost to create a more democratic and socially just future.

For instance, Islington under an inclusive economy approach are bringing services back ‘in-house’ and building more new council homes in the borough than at any time in the last 30 years and creating genuinely affordable workspaces for local start-ups in some of the most wealth extractive localities in the country.  In Hackney, there are ambitious green energy plans, local wealth building and a renewed commitment to insourcing, all intentionally designed to challenge market liberalism and national policy failures. In Camden, resources are being harnessed to share power and create social value, delivering housing, jobs, and opportunities for citizens.

The publication serves to highlight a powerful movement in which clear political intent is prompting officers and departments to innovate; harnessing scarce resources, protecting core services, stoking local citizen power, and trying to slow the juggernaut of gentrification and wealth extraction, which plague so much of our capital city.  Similar efforts by Local Authorities are being made right across the UK, under the aegis of Community Wealth Building.

Success, to date, has been achieved in spite of national policy and the economic system.  Moving forward, the turning back of the tide on decades of citizen disempowerment, disrespect for local government, and an extractive and self-serving economy will not be easy.  However, we must take heart: the journey has begun.

This article first appeared in The MJ, which you can view here.