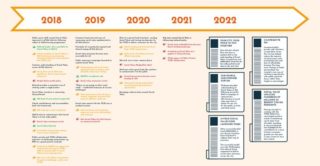 The People’s Procurement project pursued an appreciative enquiry around the progress made in social value procurement across Greater Manchester, reflecting on the developments across the city region. The appreciative enquiry sought to identify what success in the future would look like in Greater Manchester, outline the steps that need to be taken to realise successes while exploring the potential roles of the public, private and VCSE sectors in shaping and directing the social value agenda. The project was timely given that GMCA had committed to reviewing its Social Value policy, providing an opportunity for this project to shape an influence the agenda as it moved forward.

In designing the project approach with key stakeholders, it was suggested that the real challenge lies in ensuring that social value procurement frameworks seek to increase democratic accountability and deliver social justice (in terms of who decides and who benefits from procurement); but also provide a space for social innovation, orienting social value from procurement to address social problems, while bringing new ideas into procurement processes.

A series of three participatory workshops were held, with an initial workshop held with VCSE sector leads, a second workshop utilising the same format, held with procurement leads from across Greater Manchester and a final workshop which brought the two groups together to develop a shared narrative, agree set of shared priorities and an action plan for moving forwards.

In looking to implement priorities, three projects were conceived that would allow Greater Manchester to push forward the Social Value agenda in the city region.

The design of the fund would support collaboration between the public, private and VCSE sectors in collectively addressing key issues in Greater Manchester. To ensure collaboration is embedded in the fund, it should be a joint investment vehicle where all three sectors are contributing to the pot. In terms of governance, a cooperative structure could be adopted so that it doesn’t belong to any individual sector. To draw any money from the fund, you would need to demonstrate cross sector collaboration and offer a new model for delivering solutions to social challenges in an enterprising and sustainable way that affects systemic change in terms of how things are done in the city region.

The Social Value Hub was envisioned as an ever-evolving structure, developed around themes aligned to the Greater Manchester Strategy and the mayor to support a culture shift across the city region and drive the political buy-in required for the Hub to be sustained and thrive over the longer term. The Hub would ideally serve as a central resource point pulling together the work that is already being done across the city region, be that around training and skills development, understanding of what good practice looks like or approaches to measurement. It should also have a horizon scanning function to ensure it remained at the forefront of practice and help formulate policy with GMCA to continue developing Greater Manchester’s approach to Social Value.

Greater Manchester has a proliferation of networks, however there is a clear need to support the deepening of the Social Value agenda within organisations so that Social Value is ‘mainstreamed’ throughout anchors and their practice is changed as a result. A GM Anchors Network in this context is envisioned as more of a reference group that would be mobilising and activating Greater Manchester anchor organisations, providing a sounding board to bring in those organisations who are not fully engaged in the Social Value agenda.

The six priorities for action and the three projects for development provide the basis of an emerging strategy for the future development of the Social Value agenda in Greater Manchester. There are clear connections between the three projects ideas, such that they may be considered as one project, with the Social Value Hub as the focal point, a reference group which provides support and advice, and a dedicated fund to support the mobilisation and activation of the best ideas that emerge from greater collaboration. Each project idea feeds and reinforcing the other and collectively they address a six of the priorities for action. GMSVN have scheduled a business planning day to take forward these project ideas and start to move them, collaboratively, towards reality.

The Final Report can be viewed here.

This blog was originally published by Jam and Justice.