Over the past three and a half years CLES, has worked collaboratively with Preston City Council and six other anchor institutions to put into practice progressive economics that truly benefits people and place. Now known as the ‘Preston Model’, the programme is succeeding in developing the local economy in Preston and the surrounding areas in Lancashire, through strengthening local supply chains and increasing the number of local jobs.  The achievements have been published in a recent report by CLES, Community wealth building through anchor institutions. 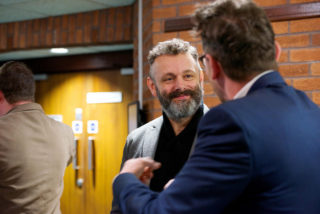 © The University of Central Lancashire

Michael Sheen OBE, said: “I first read about what was happening in Preston through recent media coverage and it got me really interested to find out more. I was excited to hear the journey they’ve been on and to explore what other communities, like my hometown of Port Talbot, might be able to learn about drawing on that approach.

“This week I’ve been announced as the new Patron of Social Enterprise UK, so it feels right to be in Preston looking at how institutions can help grow a truly social, local economy and support empowering the people of our communities. The way the Preston model uses the Social Value Act is inspiring and should provide encouragement to towns across the U.K. that this is possible. 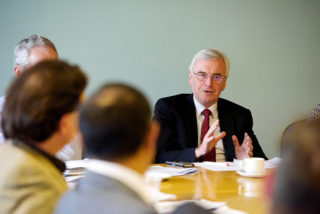 “I’m really pleased to see high level political interest in these ideas with John McDonnell also visiting on the same day and I hope all political parties invest time in understanding where cooperatives, social enterprises and the wider social economy can provide real solutions to the wide array of challenges facing our communities.”

Neil McInroy, CLES Chief Executive said: ‘The work CLES is doing in Preston shows us what can be done to develop local economic thinking and practice everywhere.  This is about building an economy, which works better for local people, business, social sector, cooperatives and social enterprise.  I sense we are at the beginnings of a movement, with CLES work and collaborations in Birmingham, Oldham and 11 European cities is testament to that’.

Read recent coverage of The Preston Model in The Guardian.

Read coverage of CLES’ work in Birmingham in The Guardian.